A specific idea previously established during a residency at PACT Zollverein

25 Fields an interaction study that started during a residency at PACT Zollverein in collaboration with Han Halewijn and Celia Hickey.

_ 25 fields _ a theme derived from a clear spatial structure shown through the marking of 25 square fields on the floor reminiscent of a chess board. In addition to the clear markings, we developed the possibility of lighting up the fields individually or in patterns. This quickly threw up the question of chance and probability. The underlying structure of these algorithms evokes the enthusiasm of play.

We also experimented with cognitive connections and disconnections. Specifically visual, where we projected an image of the space we were in onto the wall behind, showing similar or the same actions that were being performed live in space by two dancers. Challenging the audience comprehension of what is real (happening in real-time) and what is artificial (giving the illusion of happening in real-time). Illusion versus reality: truth versus lies: a play with visual perception. We used part of the ideas generated by our residency and elaborated them further into a consistent event/performance. 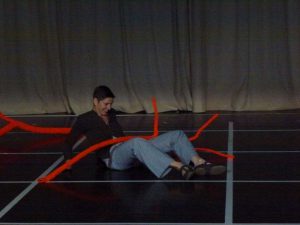 In the next stage we aim to invite the audience to participate in the process of the event, and to influence its content and/or execution. 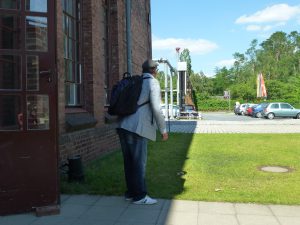 One of our developed experiments during the final showing:  https://vimeo.com/186156418 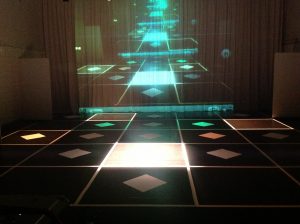